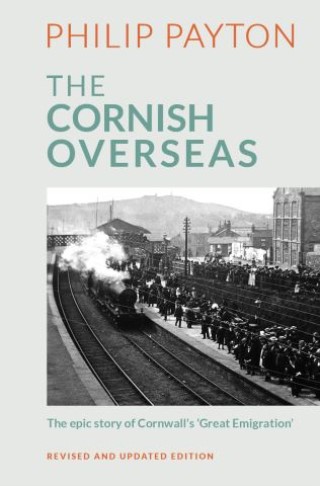 A History of Cornwall's 'Great Emigration'

In this fully revised and up-dated edition of The Cornish Overseas, Philip Payton draws upon almost two decades of additional research undertaken by historians the world over since the first paperback version of this book was published in 2005. Now published by University of Exeter Press, this edition of Philip Payton’s classic history of Cornwall’s ‘great emigration’ takes account of numerous new sources to present a comprehensive, definitive picture of the Cornish diaspora.

The Cornish Overseas begins by identifying some of the classic themes of Cornish emigration history, including Cornwall’s ‘emigration culture’ and ‘emigration trade’, and goes on to sketch early Cornish settlement in North America and Australia. The book then examines in detail the upsurge in Cornish emigration after 1815, showing how Cornwall became swiftly one of the great emigration regions of Europe.

Discoveries of silver, copper and gold drew Cornish miners to Latin America, while Cornish agriculturalists were attracted to the United States and Canada. The discoveries of copper in South Australia and in Michigan during the 1840s offered new destinations for the emigrant Cornish, as did the Californian gold rush in 1849 and the Victorian gold rush in Australia in 1851. The crash of copper-mining in Cornwall in 1866 sped further waves of emigrants to countries as disparate as New Zealand and South Africa. In each of these places the Cornish remained distinctive as ‘Cousin Jacks’ and ‘Cousin Jennys’, establishing their own communities and making important contributions to the social, political and economic development of the new worlds.

By 1914, however, Cornwall was no longer the international centre of mining expertise, the mantle having passed to America, Australia and South Africa, and Cornish emigration had dwindled as a result. Nonetheless, the Cornish at home and abroad remained aware of their global transnational identity, an identity that has been revitalised in the late twentieth and early twenty-first centuries.